It’s a beautiful day in the neighborhood, a perfect day for letter writing, but then every day is a perfect day for letter writing.  The sun is shining.  The birds are chirping.  There’s no humidity.  It’s a lovely temperature, about 75 degrees, and all is calm and right in my world.  I hope that’s the case for you too. Today I decided to write my morning letter to Janet.  Janet is a real nature lover as I am, maybe as you are too.  I wanted to tell her all about the alpaca farm I discovered when meeting the owners at Hudson’s farm market last week.  I also wanted to send her this bookmark picturing one of the very cute alpacas. I knew she would be interested because Janet loves animals.  Are you an animal lover too?

I’ve mentioned Janet to you before.  She lives in a  beautiful country setting in the state of Virginia.  Her house is right next door to her sister and brother-in-law’s farm.  Janet is always taking me on excursions through that farm via her letters.  It’s so fun! Thanks to Janet I can share in her early morning walks without even leaving my comfy sofa.  Ah, the magic of letter writing!  Are you in the mood for a little creative visualization?  Well, I’ll share a bit of one of Janet’s letters with you.  I’m sure she wouldn’t mind because Janet is wonderful about sharing her joy.

“Just returned from my early morning walk to the fish pond, strolling by the sheep and lambs in the pasture… 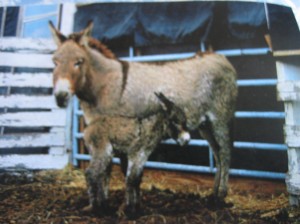 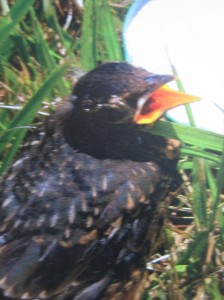 a few birds too”.

Janet continues, “When I reached the pond a dozen geese were on the water honking.  I like to watch them as they glide along and every now and then they’ll flap their wings, take off, fly to the shore or another spot on the pond, splashing when they land, and then glide along once more.”

Can’t you just picture those geese as Janet describes them?  I sure can, and I have to smile with delight as I share their joy. 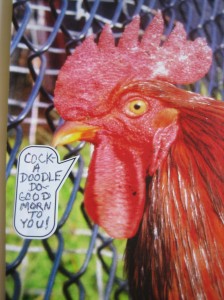 Janet is always sending me pictures in her letters.  I love them.  Like I always say – one picture is worth a thousand words.  Janet makes post cards too like this one of Mr. Rooster.  She cleverly snapped his picture and added what she knew he was thinking.  If you hang around animals enough you do get to know what they’re thinking.  On the back of the postcard Janet wrote,

“Every morning roosters crow somewhere in our community.  My sister now has three roosters and this is one of the newest.  He’s very strong and feisty, but a smaller one we call ‘Roger’ has been there the longest and none of the new roosters mess with him.  He’ll squawk and chase the other two.  Roger let’s the others know he’s the King rooster…”

Don’t you know people like Roger?  I sure do.

I enjoy travel, but I also enjoy my creative visualization with the help of letter friends.  Having pen friends from all over the world gives us an “up close and personal” look at places and things near and far.  As you can see from the postmark above I have a pen friend in The Netherlands.  She’s a veterinarian.  I bet she would love Janet’s letters about nature and animals as I do.

Vronica takes me along to places she visits like Stadtkyll and she adds her  personal commentary. Because I have wonderful  pen friends like Vronica and Janet I see more of this beautiful world than I would see otherwise.  And I care about, and become interested in, places I would never even know existed if not for letters.  After all, you can’t love what you don’t know.  Do you see how letters can expand our world?  If a person can’t get out and about for any reason, but even if they can,  they really ought to take up letter writing.

How ’bout a little sightseeing in England?  No problem, just find yourself an English correspondent like my pen friend Tracy.  Tracy lives in Jacob’s Well, Guildford Surrey.

I’m getting to know Guildford pretty well because  of all the literature Tracy sends me on the place.  I love it!

We tour neighborhood houses together via her local newspaper

and we also visit historic properties in and around Guildford like this museum, The City Museum.  Its galleries tell the story of the city from its origin as a prehistoric trading center and Roman regional capital, through to modern times with reconstructed 19th and 20th century shops.

But Tracy also sends me gifts, large and small.  She is a very giving  and  generous person who loves to share.  My kind of girl.  Tracy knows how sharing doubles the joy.  She sent me these neat London coasters

She also sends me recipes for tea bakery.  Of course she included a conversion table so I could understand the recipe measurements.

Can you see how they expand one’s life experience?

I sure hope you have a few dozen of your own letter friends, but until you get them, I’ll be happy to continue sharing mine with you.  Why?  You know.