If you’re like me you are a person who enjoys a great variety of things, but even though a great many of these things warm my heart, nothing makes me feel as wonderful and content as meeting and getting to know good people.  People make my heart sing and I guess that makes me a people person.  Are you a people person too?

When I meet someone who makes my heart sing I like to take action, hold on to them – not literally of course, but I try to keep them in my life, for as you may have discovered not everyone out there is a keeper.  Some people are grumpy and others are a bit too in love with themselves to need you or me. Then there are those bored souls, bored with life even though the world is so full of a number of things, and because they find everything so boring they themselves become boring.  I wish these people well, but I don’t invite them into my world unless I can help them in some way. If that doesn’t seem possible I move on.

But when I do encounter a person I really like, well, there’s always room for one more friend. That’s how I feel anyway, how about you?

I have learned not everyone thinks as I do though, and I learned this the hard way – through personal experience. 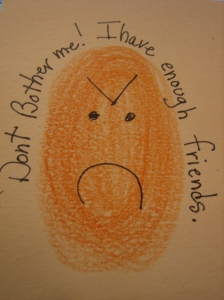 When I first moved away from home I was given the name of a person, a friend of a friend, and I was told to look this person up, give her a call.  I telephoned this gal with great anticipation, but was I surprised when instead of being friendly she gave me a very cold reception and actually told me she had enough friends and wasn’t interested in meeting me.

That encounter was quite pitiful for sure but it did teach me a thing or two.  I learned not everyone is a people person  and I now realize why some cautious or fragile souls never reach out to strangers. There is definitely some risk, it’s true, but  I’m happy to report I never met anyone so unfriendly ever again, in fact, I’ve met many wonderful individuals, quite a few by chance, and a good many of them have turned into lovely friends.

So If you’re looking for a few more in-person friends or pen friends I suggest you keep your eyes and heart open as you travel through your daily life.  Simply by sharing a smile and then engaging in conversation if that smile is returned, wonderful, friendly things can happen. They happen for me and they can happen for you too.

There was the time I was sitting on the porch of the beautiful Red Lion Inn In Stockbridge, Massachusetts and I noticed a young woman with her parents and her small, sweet son.  Her son reminded me of my own sons when they were young so I said hello and struck up a conversation.  In the days that followed I ran into Carole and her son, Ewan, a few more times.  The subject of letter writing came up as it always does with me and it was decided we’d exchange addresses and keep in touch by letter.  Now, years later and many letters later, we’re still communicating, and one of these days I’d love to meet her once again back at The Red Lion Inn because it’s still a favorite retreat to both of us.

Speaking of Stockbridge, I met another most interesting and talented person while there.  I was visiting The Norman Rockwell Museum and began talking to one of the museum’s docents in Rockwell’s studio.  It was the end of the day and he asked me where I was from, a question I’m sure he asked all the visitors, but we were both amused that my home was near the place he grew up.

The museum was quiet so we chatted for a time and I learned James was an artist in his own right.  He pulled out some photographs of paintings he had created and I was quite impressed with his skill.  In fact he had created a large painting of The Red Lion Inn that was hanging in its lobby.  I in turn told him all about my love for The Art of Letter Writing.  We had many appreciations in common so it seemed tragic to meet and then as quickly lose touch forever, so keeping in touch through letters seemed to make sense. We became pen friends.

Not only was James a fine artist but he wrote wonderful letters too.  This was not surprising to me because some of my favorite correspondents have been men.   Not many men in our modern world think of writing letters, but of those who do, many are quite masterful.  The content of James’ letters was always thoughtful, and  most interesting, but what was even more wonderful was the art work he included.  Being an artist, James illustrated many of his letters and though I’ve gotten lots and lots of very artful letters in my day, no one until James had ever illustrated their letters to me.

I could tell you stories of so many lovely people, kindred spirits I encountered in chance meetings, people who lived far away from me, but for one brief shining moment our paths crossed.  These people could have slipped out of my life forever, but because of letter writing, these meetings continued in a personal and artful manner, blossoming into real and meaningful relationships.

Such a meaningful relationship developed between me and this lady, Evelyna, a most talented baker.  There she was selling her delicate cookies at a craft show and they caught my eye because I too dabble in the art of patisserie.  When I’m not writing letters I enjoy whipping up goodies and inviting people in for afternoon tea. The custom of Afternoon Tea, like The Art of Letter Writing, is a forgotten pleasure in today’s world, a pleasure I encourage and promote. I knew anyone who could and would create such lovely bits of edible art  was someone I needed to know so I struck up a conversation with Evelyna and not only that, I invited her to one of my teas.  Evelyna accepted my invitation and from that day forward we kept in touch, often by letter even though we live in the same city. Evelyna’s letters are truly as artful as her bakery and I’m so glad I acted on our chance meeting not letting the opportunity for friendship escape.

Then there was the day I was visiting my son who was in graduate school at UCLA. We decided to lunch at Cafe Marcel on the Promenade in Santa Monica, California.

This charming French restaurant was the scene of yet another chance encounter which turned into a warm and lovely friendship.

Deborah sat across from us with her sweet little daughter Amelia.  I asked Deborah to take a picture of me and my son and a few words were exchanged, then a few more. Deborah, a social worker, wife, and mother with loads of responsibility and stress in her life was like most modern people today.  Busy, busy busy!  And like most people she was not into The Art of Letter Writing and not even used to strangers like me starting conversations with her, but by the end of lunch when I suggested we keep in touch she graciously accepted the invitation.  But, after a few letters, she admitted to feeling a little leery of this very friendly stranger, me, reaching out to her in friendship that day a few months ago.  After all, who does that sort of thing?  Answer: I do!  And I hope you do too, or will.  As my friendship and letters with Deborah continue (with one in-person visit back at the cafe in the meantime) I think she is realizing just how beautiful and valuable The Art of Letter Writing and chance meetings can be, especially to the busy, modern day person. Here’s an excerpt from one of Deborah’s early letters:

“Forgive me for not responding sooner to your gracious letter.  Truly, I was very moved by your kindness, almost to the point of tears.  Simple acts of kindness, of taking the time in a slow way, are so rare in this day and age, in my world anyway, that I was struck by your appreciation of me and my daughter.  It is sad that there is so much distrust, almost paranoia in the air, that just being a nice, loving, open person like you should disarm, but it does.  And I think this is the first time I’ve received a handwritten letter that was not a card or a thank you note or some such, in a long time.  I can see the importance and the power of your epistolary movement.  I think there is research on the merits for brain development, of eye-hand co-ordination, of learning to think and consider, in writing by hand, most importantly for children – instead of typing.  It’s particularly scary to think how many children are going straight to computer in elementary school.  Handwriting is a filter for the mind and soul.”

Deborah is sure articulate, as well as lovely to behold, wouldn’t you agree?

I could go on and on telling you of many more people I’ve come to know and love because of chance meetings and the extra help of The Art of Letter Writing, but it’s time I run along and write a letter to a young fellow who sat next to me on a recent plane trip to San Francisco. This amiable fellow, Sergej, was from Switzerland. He was a law student there. On the five hour ride through the air we spoke off and on discussing his studies, my love of letters, and many others things.  When I finally asked him if he would write back to me should I send him a letter, he replied, “Of course, it’s only polite to do so.”  So I shall now say hello to Sergej and  goodbye to you. But ’til we meet again, remember to be open to those kindred spirits who pop into your life.  Just because they may live far away from you needn’t be any reason to give up on possible friendship – just suggest you continue your initial conversation by letter. and If these people are really nice you can suggest they write to me too.

So till next time,