“When I use a word,” Humpty Dumpty said, “it means just what I choose it to mean – neither more or less.”

Words, beautiful words!  I love words, don’t you?  Big words, small words, familiar words, and those mysterious ones that  have to be looked up in the dictionary.  I think most people take words for granted, but not letter writers.  Letter writers love and honor words taking  great care with them.  Words, born in  thought, constructed with care placed onto paper so that they are not only legible, but also lovely to behold, preserved so they can be shared over and over again – these words are precious and highly valued by those of us who write letters.

Most people are talkers using words freely, but I wonder why all those talkers don’t also enjoy writing their words down as much as letter writers do.  What is it about writing that puts some people off?  Too much trouble?  Too permanent?  Too slow?  I wonder. 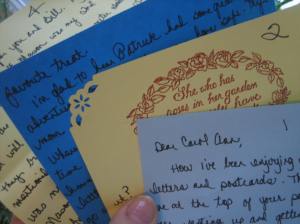 I suspect there are a lot of people out there who would love writing if they only gave it a try without a teacher standing over them criticizing every line.  Writing compositions for school must have their rules, and rules aren’t usually a lot of fun, but there are no rules in letter writing.  In letter writing it’s self expression and creativity that rules.  There is no right or wrong way to express our thoughts in a letter, only “our way”, and the more personal and creative we are the better.

I did my share of writing in high school and college, but my passion for writing did not come until much later, not until I discovered letters. Letter writing offered something special to me, the  chance to express myself freely.   I could write just as I pleased.  Nobody was grading me.  The more I wrote, the more I loved to write.   After a while, writing became a daily thing, and now it’s safe to say I’ve become an avid writer, an avid letter writer, writing letters every day.

Yet it’s funny; even when I was writing  ten or more letters a week  I didn’t  think of myself as a real writer, not until one day.  Here’s what happened.

I was writing letters in a coffee shop when a distinguished -looking gentleman walked in.  He carried a briefcase, smoked a pipe, and looked quite scholarly.  He settled in a corner and began to work at his writing.   I too continued writing in my own corner. After some time this man got up to get more coffee, but as he passed my table he paused, looked down at my papers, and asked, “Are you a writer too”?  I thought for a second, then quite delightedly responded, “Why yes, I am”!  And that’s the first time it hit me:  I was a writer! After all, one doesn’t have to be published in order to be a writer. To be a writer one simply must write, and that I do every day.  I know I’m not a Dickens or a Shakespeare, but I don’t try to be.  I can be a writer just like Me.

Of course if we’re to be understood a certain appreciation and understanding of grammar is important.  Ask my pen friend Markell.  Markell is not only one of my pen friends, but she holds a Masters degree in linguistics, teaches English as a second language, is a professional editor, and has an admitted obsession for writing down sentences demonstrating the structure and quirks of American language all for a manuscript she’s working on  called “Phrase Anatomy”.

It takes a certain amount of courage and gumption to write a person like Markell, but she is very sweet, uncritical, and she actually enjoys my sometimes peculiar sentence structure for she delights in quoting me for her grammar book using my phrases as examples of what not to do.  Does this bother me?  Not a bit.  Even if my high school and college English teachers read of my boo boo’s I care not, for I have better things to worry about than quirky grammar. If incorrect productive verb prefixes or any other grammar issue is preventing you from writing letters I say – “Don’t let those things stop you. Rules are made to be broken.”

Each pen friend you acquire will use words in different ways  and the more writers you meet the more you will see  there are all sorts of ways to write.  You will love words more and more and appreciate how beautifully they communicate.  Markell not only inspires me to improve my English language skills, but she also encourages me to study other languages.

Another pen friend, Bruce, encourages me and all his other correspondents to discover and embrace fine literature and he does this in a very interesting way.  Let me explain:  Back when my father died I was getting many letters of comfort and sympathy from all sorts of people, but one letter stood out.

The words of this letter arrived in a lovely card, but these words  were no ordinary words.  They were penned in a most elegant handwritten script and they read as follows:

“There should be no despair while nightly stars are burning.  While evening sheds its silent dew or sunshine gilds the morning.  There should be no despair though tears may flow like a river.  Are not the best beloved years around your heart forever?  You weep.  They weep.  It must be so.  Winds sigh as you are sighing and Winter pours its grief in snow, where Autumn leaves are lying.  They survive and from their fate your fate cannot be parted.  Then journey onward not elate, but never broken-hearted.”

I bet you wonder who writes like this in today’s world.  Well, not many people I’m sure, but this message was not composed by a modern day writer at all.  It was composed by Emily Bronte, the famous English novelist of the nineteenth century.

Bruce signed Emily’s name to the card because though I’m sure she would’ve liked to sign the card herself that wasn’t possible since she’s dead and  gone –  gone, but not forgotten, especially with people like Bruce keeping her words alive and out there enriching people like me.

It was very kind of Bruce to think of me by sending a card for I certainly appreciated his concern for my feelings, but in addition to that, I was most impressed with the creative way in which he did it. I’m sure authors and poets hope their words will be remembered touching millions even long after they’re gone, and they will be remembered  if we who know and love literature share it in this most personal way.

Naturally after receiving the card from Emily I wanted to get to know her better.  I read her biography and went out of my way to read more of her words.  I got to know her sisters too.  Now, the Brontes are some of my favorite “dead friends” and getting to know them helped me through a rough time in my life.  They had their share of pain and suffering too.  We’re all in this thing called life together and sharing not only doubles the joy, it also divides the sorrow.

Perhaps you love words, language, literature, and sharing.  Perhaps you are already a writer.  Perhaps you are already a writer of letters, but if you’re not, perhaps it’s time you become one.  Share the good things in your life – your enthusiasm, your knowledge, your ideas, your favorite things.  By sharing, especially in writing, your words will be lasting, words that can help make  the world a brighter, more intelligent, thought-filled, articulate place.

The world of ideas expressed in words